The Doll in the Attic

Welcome, welcome, young ones! I see you’ve chosen to sit by my fire this evening. Perhaps I have the greatest treats to give – or perhaps you’re here to hear my terrifying tales? Whatever the case may be, all are welcome here by the warmth of the campfire.

Here, take this bowl of treats and pass them around. Take only one to start – yes, Go, that includes you, save some for the youngsters – and once the bowl has made it back to me we can pass out more. I don’t want any of you to get an upset stomach over the tale I’m about to tell!

One more thing before I start my tale of dread! I need the fire to burn just a bit lower, to heighten the effect. It’ll be worth the wait, young ones, I promise.

Ahh, there we go! The perfect time to start a tale of dread and wonder – the tale of the doll in the attic!

A long, long time ago, when I was still young, and the turtonics roamed ever farther in the chaotic twisted waters of our world, an abandoned house sat alone on the crest of a hill. The house was old, older even than I am now, and had sat without occupants for many, many years. The wooden siding was warped, the door hung off of its hinges, and the gate was stuck wide, beckoning any mhoat brave enough to enter the creepy grounds. No one knew what lay inside, as no one was brave enough to step one foot beyond that creaking, broken metal.

The house was surrounded by dead grass and twisted dead trees, a small graveyard in the back – you see, it was a very old, private house, owned by an ancient and wealthy family of mhoats. It wasn’t unusual for mhoats in those days to bury remnants of their kin in private lots, especially if they had the money for a fancy funeral. In fact, I–

Oh? What’s that? The story? Oh, right. Forgive me, young ones, the old mind does wander so…

As I was saying, the house seemed to be surrounded by death. It stood out sorely on the back of this turtonic, in this village, as everywhere around it was bustling with life. Mhoats went to and fro to the stores, to their schools, to their work, to the fields beyond the house infested with the plague of our world.

Strangely, though it was abandoned and no longer maintained, the fungus never seemed to grow at that old abandoned house…

Rumors began to spread, and quickly, once the first mhoat noticed that strange thing. They talked of ghosts, haunting the halls, that moaned and groaned and filled the house with their otherworldly presence. They talked of vampires, roaming the town at night, draining the blood of all that slumbered peacefully. They talked of witches, cackling evilly as they brewed potions with the only poisons that could harm a mhoat, delighting in their evil misdeeds and treacherous nature to their fellow mhoat.

No one cared to actually confirm one of these rumors. After all, it was a scary thought, to have monsters roaming in that small village… and no one was brave enough to crest the hill overlooking the town, enter the worn down house, and see for themselves.

That is, until I got the idea to try and enter it myself–

Alright, young ones, yes, you’re right. It was merely a consequence of a cruel but failed dare from my peers. At the time, I thought I had no choice but to enter the house, lest I lose social grace and respect!

I carefully armed myself with my trusty light extending beam – oh, I suppose you call those flashlights, now – a thick woolen sweater, and a hearty nerve of steel. I was terrified to enter the grounds, but I couldn’t let my friends know that!

All the same, I was rattling down to my bones as I took my first step past the stuck gate. My friends and peers all huddled around the fenceline, looking anxious but excited, as I waved back to them nervously. We had made the trek together up the hill, with only the light of the moons and our own bodies leading the way, but it was my task alone to enter the supposedly haunted home.

Carefully, I pushed the semi-open door – it creaked, and fell off the hinges with a resounding crash. I almost turned tail and fled right then, but I was able to pull myself together at the last moment. Not my friends, though – the second that thunderous drum of a sound peeled out into the still air, they dashed down the hill as though their lives depended on it!

And so, my dear young mhoats, I was all alone in the haunted house…

Right beyond the entryway, where the dim light of one of the moons still hit, I could see a set of stairs ascending up into the house. I wanted to leave right away, or at least after a few minutes to disguise my terror, but something about those stairs called out to me. Bravely, or perhaps stupidly, I wandered slowly up those steps, but with purpose, towards the top flight.

The stairs seemed to wind up and down throughout the whole house. It was multiple stories, after all, and I shouldn’t have been surprised by the way it made me so tired to keep climbing them. Unless, of course, a ghost or ghoul was draining my energy…

But no sir! I would not entertain such thoughts, and shook them out of my head forcefully. I only had a couple more landings to go, I thought, and then I could leave this place and boast to the other villagers about my bravery!

Finally, I reached what felt like the hundredth floor. There was only one problem… nothing was there! I didn’t know what to think, what to do, until I noticed the perfectly square hole in the ceiling, right above the top step. I could feel it calling out to me, but there was no way I could reach it by myself.

As if responding to my thoughts, a rickety wooden-and-rope ladder unfurled from the darkness, spilling out perfectly in front of me. I nearly jumped, but caught myself from falling back down the stairs in the nick of time. I was just shocked, that’s all!

Going against instinct, I began to climb, hand over hand, up the ladder. It swung wildly under me, but I was determined! I just had to see what lay in the attic above!

After climbing up six slats, I finally reached the lip of the attic. My lights finally could pierce the darkness, the never-ending blackness of the attic, where no windows peered in.

I uttered a quick prayer to Yel, and hoisted myself up the edge of the ceiling. No going back now!

Inside, I could see every surface was covered in dust. It appears the old owners had used this place as mere storage, and broken chairs, wobbly tables, and a big wooden chest sat spread around the room, in various stages of decay. When I shown my light at the ceiling, massive cobwebs seemed to flutter in the breeze–

But wait. There weren’t any windows up here, and none in the hallway below. How were they moving so rapidly?

A giggle arose from the darkness.

It didn’t sound like any of my friends, or even anyone I knew in the village.

I was well and truly terrified now… I wanted to leave, oh so badly, but something called me to the chest in the center of the room!

I walked slowly towards it, the beam from my flashlight wavering as I trembled more with every step. I could hear my teeth clacking together from their chattering, my eyes wide, and my white fur was surely stained with the sweat from my nerves and the hot sweater!

The chest hung open, but it wasn’t empty.

Inside, a mhoat-sized doll lay. She was beautiful! Her color was mostly gray, but the places where a real mhoat’s goo internals would be were a deep, dark blue. She had long ears, even longer gray hair, and two angelic wings sprouted from her back. Ribbons arched from behind her head, and curled up flower petals littered the bottom of the chest she was hidden away in.

She lay motionless in the chest, and I felt sad to see one eye was missing, cracked open long ago, possibly the reason she was up here. The other was closed, though I knew that it had to be the same beautiful blue that covered her arms, and the intricately painted markings that lined them. She was a mhoat, after all, even if she was just a doll of one. I gently reached out, picking up one of the fallen petals, but also brushing my hand past the mhoat doll’s delicate porcelain “skin.”

A sound came from behind me, and I jumped; turned around. Nothing was there, but perhaps something had fallen from one of the old tables, loosened when I passed by.

I shrugged, feeling my accelerated heart rate begin to slow as I laughed nervously. Nothing was wrong, I had thought!

I looked back in the chest.

The doll’s single eye was open, and she had opened her mouth into a wide, blue smile.

This time I well and truly shrieked, seeming to fly down the ladder and then the steps into the welcoming entrance of the house. I burst out past the open door, my legs pumping and lungs heaving, but I had made it out! I even made it past the gate with no one following, no last grasping hands like those other stories you younglings like to read.

I found the rest of my group, huddled by one of their homes, and quickly recounted my tale. At first incredulous, they quickly believed me when I showed them my proof – the flower petal, crumbling in my hand.

The next day, a team of big, burly mhoats went up to the old house, and went up into the attic. Though they found the chest exactly as I had described, nothing remained there of the old doll I had found.

Nothing, that is, apart from the petals, the faint smell of flowers, and a whispery giggle that filled the forgotten home…

Sorry, dears, none of those “jumpscares” of which you seem to be so fond. Just a classic scary tale, and one that’s true! I hope you enjoyed my tale, and come sit by around my fire again.

Why, if you’re extra good, I might even show you the petal I saved, for it refuses to age and die. I suspect, youngsters, that the Porcelain Doll in the attic is still out there, waiting for her chance to snatch the next curious visitor to her haunted home! 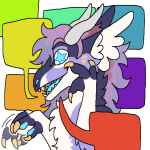 The Doll in the Attic

Elaine recounts a Supernatural Haunt to an excited group of young mhoats! 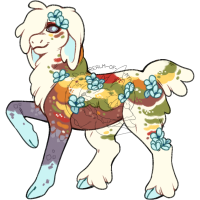 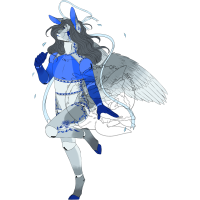 In the rich text editor:
[thumb=455]
In a comment:
[The Doll in the Attic by Oboe (Literature)](https://www.mhoats.com/gallery/view/455)
There are no comments yet.