Lightning shattered red skies this night, above the lonely turtonic dubbed Carcosa. Such fleeting light enveloped jagged and crumbling spires rising from the center of its back. Be them remnants from a world long lost, or more recent ruins was nigh impossible to discern, given the amount of overgrowth. Coils upon coils of parasitic fungus crawled up not just the battered castle but every inch of the landmass, thinning only along the shore where few mhoats grazed.

For such a particularly large and ancient turtonic, it housed surprisingly few residents. Those few mhoats who did reside shuffled and ambled slowly about, lethargic and zombie-like, without any ambition or self-awareness. Their only purpose seemed to be culling this never ending fungus which replenished faster than they could devour it.

Among the violent pounding of waves and deafening rolls of thunder, a far more somber melody hummed. Mournful and low, it was a sound hard for a foreigner to pick out from external ambience. And for those native, the call was so ever present that it would fade unnoticed to white noise. Only one remained yet attentive to this song of suffering.

"Old friend," a throaty voice thrummed. Lightning cracked as if on cue, illuminating the slender figure otherwise obscured by waves and seafoam. "I shan't forget my vow to you. I shall collect you more servants yet."

The wistful melody of the turtonic broke into disjointed barks in response. Be that a plea for aid? Disbelief? Bitter laughter? He knew it a sound for all of the above, and rightfully so. Bound to the sea himself, the task of collecting enough land dwelling servants to clear the parasitic fungus was not an easy one. Most of their collection were fellow aquatics, to whom he bestowed selkie cloaks to allow them passage that much further inland. Yet, even selkies were bound to the sea, and there they always returned.

It was an impossible task convincing mhoats, especially land-bound varieties, to immigrate where such wild magic ran rampant. This same inexplicable magic kept Carcosa trapped in the cursed north pole after all. Pleas for help were typically met with pity and condolences, but no souls brave enough to volunteer aid nor relief.

"A turtonic so far gone is surely doomed," claimed the general consensus.

"Why do you call more mhoats to their deaths instead of evacuating those already residing?" Others would chide.

“A noble but foolish quest. Hold your lunacy to yourself.”

He had been called mad, lunatic, tyrant- every name under the sun suggesting lack of a sound mind for pursuing this effort. But He had made a promise, and He was not one to go back on his word. So long as He had breath, Carcosa would not be abandoned.

When civil pleas fell on deaf ears, more… drastic measures had to be implemented. Tales of monstrous tentacles hauling off unsuspecting seafarers began circulating shore-side settlements. Entire boats, when it could be managed, had been known to drift off course in favor of the dreaded North Pole. At the center of these fearful whisperings remained one common denominator: a mad tyrant, the King in Yellow, kidnapping mhoats to eternal servitude for cursed Carcosa.

If it meant this old friend could hang on another day, He would play the role of villain.

He would be the lunatic tyrant so light would still shine on Carcosa.

He would be the King and Yellow, and Carcosa would not fall. 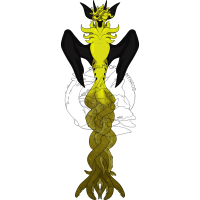 In the rich text editor:
[thumb=429]
In a comment:
[[Gift] King in Yellow by PaisleyPerson (Art) ・ **Content Warning:** Flashing Lights](https://www.mhoats.com/gallery/view/429)
There are no comments yet.