A curious Mhoat looked down upon the scene below. From their high perch upon a rooftop, they saw many Mhoats (and even a few Vabbits) gathered in this town’s square.

It was nighttime, so the only lights came from the many lanterns scattered about the area, but this Mhoat’s body gleamed with a very slight eerie glow. Chuckling to themself, the Mhoat thought;

“What a sight to see in the Fall season. All of these individuals gathering for the Slumbering Feast.” The Mhoat’s eyes gleamed, additional ones opening. “I might just have to do some ‘trick’ or treating.” The Mhoat chuckled again, dashing out of sight. Padded paws dashed across the rooftop as they darted off.

A young adult Mhoat glanced up, hearing something. Rupa thought to herself, “Didn’t I hear something just now?” Their ears quirked back and forth, but they were brought back into the fold not too long after that, being overjoyed by the ongoing Costume Pageant in front of her.

Many Mhoats were dressing up in various sorts of costumes, and it was a sight to see! Rupa was giggling with joy, but also a bit confused— as there seemed to be something funny going on in the background.

Flickers of orange… uh… tails? Seemed to be popping in and out of view, tripping up a few Mhoats here and there. No one fell, but Rupa swore she could hear someone giggling in the distance. Rupa started to get a bit worried at noticing this, and started to back away. Rupa was held in by the crashing crowds of Mhoats here to see the Pageant though.

Rupa grumbled slightly, starting to get uncomfortable with the amount of Mhoats around them. So she began darting under arms and legs, shifting into her more feral form to do so.

Managing to make it a few feet beyond the worst of the crowd, Rupa got into a slightly better position to have some air. She slumped into a sitting position and sighed.

Suddenly, a bit of a crash came from the stage— Someone had tripped, and caused multiple scene pieces to fall, causing a further crashing to occur and other individuals to fall too. “What a mess.” Rupa thought. But then she saw something or possibly someone dart away from the back stage— they blended in, being dark in color, but their body gleamed a faint orange. Rupa glanced around wondering if anyone else took notice, but it seemed no one had. Most individuals were simply concerned with those on stage.

“Hey come back here!” Rupa forced herself to yell, not knowing what to do. The figure glanced back very slightly, but kept running off into the night.

Rupa, still rather distressed, dashed off— still in feral form— in pursuit of this small Mhoat, hoping they might have known what happened. Rupa suspected they were involved.

“Did one really see me? Darnit. Don’t know if they’re following me…” the cat-like Mhoat thought. “Nah, I was sneaky.” They chuckled a bit as they ran farther into the night.

Dashing off further into a nearby forest, the little cat-like Mhoat chuckled quietly and snuck into the maze of many trees and other plant-life. No one came by here except the local wildlife. This forest was rumored to have old ghosts and spirits… which was entirely possible on this island of course. Many things could happen to Mhoats.

The little Mhoat snuck between the branches and brambles, almost heading towards some sort of den or hideout. Perhaps this was their home. Regardless, they blended into the night, and soon disappeared.

Meanwhile, Rupa was trying to run in the direction this little Mhoat dashed into, but it was getting tough.

Rupa’s legs were burning and groaning from the strain, the feral form was easier to run in, but the Mhoat they had been chasing just seemed to keep going!

Nearly on the verge of passing out, a feeling took over Rupa’s body. “Oh not this again… I guess I’ll have to resort to it though.” Her body grew bigger, her fur darkening to a similar color as the Mhoat she had seen earlier. Rupa’s legs grew stronger, and they felt their body had a renewed strength and stamina. However, their mind became a bit more aggressive and angry about the situation.

Rupa had shifted into the “Werewolf” form, a more aggressive yet also stronger form. With increased speed, the large Mhoat with many eyes crashed into the forest ahead.

Peering from many different angles, the Mhoat glowed with more intensity. It seemed the branches and bristles didn’t bother them at all. “Hey! Get out here! You might have hurt others back there!” Rupa yelled.

No response from the trees. The smaller Mhoat, deep inside their hideout, heard the bellowing however and wondered what was going on.

“Eh… they’re not going to find me here if someone did follow me.” With one half closed eye, they tried to go back to sleep again.

This didn’t last long, however.

Rupa’s crashing about eventually crashed through the roof of the semi-buried hideout room. This caused the fur on the cat-like Mhoat to stand up straight with confusion and fear. Rupa shifted to their artisan form, and grabbed the startled ‘cat’.

“Yo! I tried to get you to come peacefully!” Rupa yelled. The little Mhoat squirmed and wiggled, and the next thing Rupa knew, their hand was… bit?

It seemed the smaller Mhoat had a mouth peering from their… leg?! Rupa wasn’t expecting that.

“You snooze you lose!” As the Mhoat dashed off again.

However, that wasn’t the end.

Rupa bounded over to the little one’s form and grabbed them harder this time, careful to avoid their leg-mouth.

“I think you’re going to have to come with me now… and at least apologize to the Pageant participants.” Rupa growled. The little one made a noise between a mewl and a groan.

It was going to be a long night. 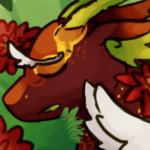 Didn't have time to draw... so I wrote! I hope this brings a smile to the winner. =)

My commission info is here + other info (Patreon) is also here on my cardd!

Also this would be a gift for the final winner! Just also had my character in it too. 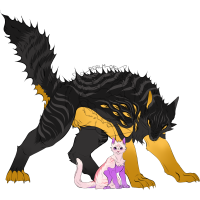 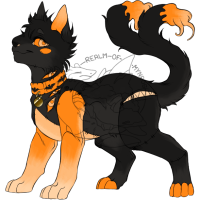 In the rich text editor:
[thumb=422]
In a comment:
[[Gift + XTA] Tricks Gone Wrong by mewhaku (Literature)](https://www.mhoats.com/gallery/view/422)
There are no comments yet.